Last night after a good dinner and astounding show of the gate closing ceremony I went in to my tent trying to get some rest with Lil G sleeping outside. It was a bit warm, so I guess I can make it without the sleeping bag. About 11 pm wind started picking up and later came the violent sandstorm.
I was holding on to the tent and praying hard it won’t collapse and fly off with me inside. Half an hour later, it started slowing down. Phew, still in one piece.
But stars were not to be seen. Few minutes later I could hear the rain falling on the tent. Very glad that it rained down to cool off the night. From slow it got heavier and heavier; with loud thunderstorms and strong winds. I was laughing to myself like a madman. Told myself, “Argh finally, a refreshing cool air for you, Hadi. It has been a long time since you last slept in a tent.”

I thought that it would only be for awhile but I was wrong. It lasted until almost 3am. And I have been up every freaking hours to hold still my tent. I kept telling myself, “it is going to be OK. Just pray and hang on.”

After it calmed down, I peeked outside the tent to see whether G is OK. She slept with her side on the ground; she couldn’t fight the strong wind! Picked her up and tried to get some sleep. But oh! The sunrise greeted me way too early. As early as 4am! But I didn’t care, I picked up where I left off. Had a short nap and woke up by 7am. Had a quick packing and off for a light breakfast not forgetting a taste of Pakistani chai. We were on the road short after, determined to be in Islamabad before dark. The road here is very good, well built and taken care of. I cruised at 80km and skipped Lahore city by using the bypass road. I don’t feel the need to put up a night there as I have been there before. Furthermore, a night means more money flying out of my pocket which I don’t really have much now.

After 100km, I took a break. Got Lil G filled. And a drink and stretching for me. Later, I sat by the floor on the side of the petrol mart just to catch on my breath. An old man walked towards me and started talking to me in Urdu. I gave my salam and he was saying something that I could not comprehend. He walked away and came back with a plastic chair. He told me to sit on the chair, not on the floor. Oh! I was so touched by his kind gesture that I almost cried. He insisted for me to sit on the chair and not on the floor. I refused but he knelled down and trying hard to talk to me. I took his offer and thanked him politely. He disappeared and came back few minutes later with a glass of water for me.

Pakistanis. They have their own way with a stranger, a foreigner like me. I will treasure this moment forever.

Moving on, I headed straight to Islamabad. Went for a courtesy visit to Malaysian Embassy. So happy to see fellow Malaysians and I instantly felt at home. They were so kind and generous to provide me a place to put up for the night. When I arrived at the embassy, I missed His Excellency by few minutes. But worry not, will be meeting him soon.

I unpacked my stuff in the room and contacted my Pakistani friend. Had the luxury of Pakistani lamb for a dinner till I bloated! Hahaha, good food after a long ride. I needed the fat.

Did some laundry, had a good shower as well as a good sleep. Later prepared my papers for the next border-crossing. Will be heading out to Taftan and into Iran in few days time.

Tonite, am sleeping over at the home of my Pakistani buddy, Shahid. A good buddy and very helpful indeed. Been running around with me in this clean city. And he feeds me a lot too.

Till the next update, people. 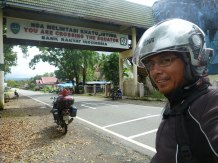 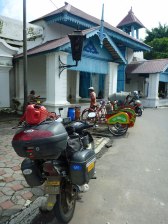